I’ve been working, once again, with Daria Brennan, at http://beegraphica.com/, to develop a poster to give a visual idea of the vibe I’m hoping to go with for the movie. Here’s what she came up with (click on the image to get a larger version): 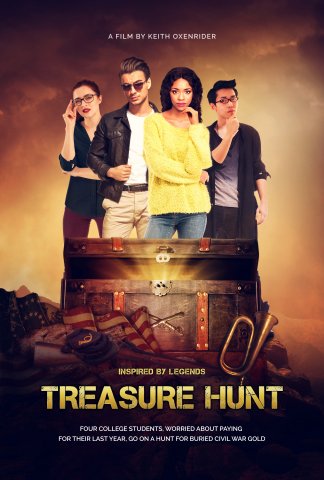 I’ve asked her to add “Inspired by Legends” to create more of a hook.

Last weekend (hard to believe it’s only been a week) I contacted a lady who has done extensive research into the Civil War in general, and the Shenandoah Valley in particular. She’s snowed me under with responses (more than 32 emails so far), with so much detail that I’m actually worried about tying my script too close to reality and triggering knuckleheads running around digging holes all over the Valley. I’ve called her ‘amazing’ but that seemed inadequate, so I just Googled synonyms and came up with these:

All of those words also feel inadequate, singly, in pairs or even en masse. Now I feel even more pressure to develop my script to try and live up to her efforts. I did manage to start writing last Sunday, cranked out a whole 1K words, then her feedback started to trickle (deluge) in and I got lost in learning about history. I’m fortunate she understands that only a tiny fraction of what she’s offered can make it into the script, but I have a real challenge picking a choosing what elements to put in. I don’t want to create a history lecture, but I’d like to put as much actual events into the script as possible. I’ve learned a few ‘tricks’ to making an infodump palatable, and intend to put them all to work in this case, but it will be a challenge to create a captivating screenplay that’s nonetheless educational and (largely) truthful.

I’ve been reading a small pile of books on storytelling for movies, directing actors, working with nano budgets, etc. and am now torn. A strategy I really like, and one I intend to follow if I carry this to the next level and start a production company, is to use social media to test the waters of a movie idea before it’s been filmed, or, indeed, the script has been written. The idea is twofold: first, to test a marketing concept and see if it actually reached the target audience, and that audience is large enough to profitably pay for the movie. Second, to use that success (if it fails, either rework the marketing or move to another project) to approach investors to pay for the production. I’d dearly love to pay my cast and crew, and, further, to film it in a couple of weeks instead of on weekends spread over months. But there’s no way I can afford that now, and I’m reluctant to dilute my already diluted focus (I still have a regular job, still need to be a present husband and father, not to mention exercise this blubbery body) and drag this project out longer than I expect to already take.

On the other hand, I’m really starting to feel that it’ll be possible to generate enough interest to make some money ‘four walling‘ and marketing directly to the local area. Not to mention marketing directly toward Civil War enthusiasts. Heck, I was envisioning setting up a table in the theater lobby selling DVDs, soundtracks (a very good friend is going to put me in touch with a young composer who might be willing to work for the exposure), T shirts, etc. as a way to make a few more bucks above and beyond any ticket sales. I’m also looking into local and regional film festivals and researching those related to the Civil War. All these feel like very viable and realistic ways to make some money, though how much I can’t really get a feel for. And, with the idea of making ‘real’ money, paying cast and crew feels like something I should do.

Though I’ve researched deferring compensation for cast and crew, after reading extensively about it, the conclusion I’ve got is it’s not fair to everyone involved. If the chance of making money is a gamble, it’s cleaner to just be up front with the cast and crew and let them know that reel (and beer and pizza) is it. Besides, it might realistically take years before (if) a movie starts to make money, particularly if it has to slowly build interest.  And my investor needs to be paid back as well; deferred compensation happens before investor compensation and can really make that complicated.  While the cast and crew would be putting in lots of hours, I’ll probably have a couple of thousand hours in it by the time it’s something anyone would want to watch, and I feel me getting a few thousand dollars will make it a lot more likely that I’ll have the motivation to take on the challenge of a fully-funded movie, whereas if it took years to dribble in the deferred compensation to cast and crew, I might lose interest.  Of course, anyone can get struck by lightening, but I think the balance of probability is very much in favor with the movie being lucky to earn back it’s (nano) budget.

But I do dream…

Biochemist, MBA, then programmer. Now novelist, screenplay writer and hopefully director. What a strange trip it's been. View all posts by mitusents